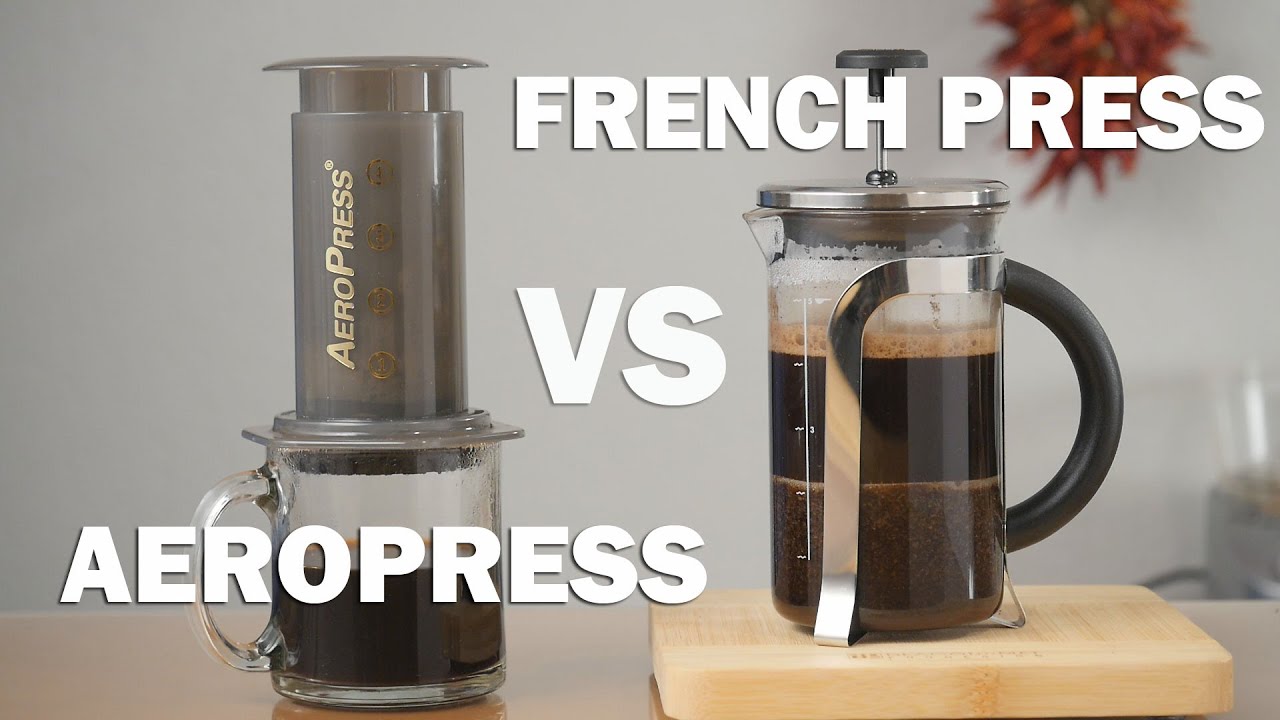 Coffee aficionados love to have perfect control over the brewing process, and this is why manual brewing is more and more popular. If you are considering starting manual brewing, you are probably too comparing the two brewing methods. Even though the two are somewhat similar, you will be surprised to learn that coffee brewed in these two devices is very different. Read through, and you will learn how, and why.

In the world of coffee, this has been a very hot topic. Almost overnight the AeroPress brewing method took over the coffee brewing world. I received the AeroPress as a gift from my sister one Christmas. When I first saw it, I hated it and I thought my sister had bought me a crappy present because she knew nothing about coffee. However, my curiosity took over, and I tried it. It wasn’t love at first sight, but it was love on the first try. After a little bit of practice, my technique improved, and within a few weeks, this crafty device had completely taken over the coffee lovers’ world.

This has been happening throughout the coffee industry. The AeroPress becomes more and more popular, but the old French press still has its own supporters, who will not trade it for anything. The question must be asked, therefore - what is so great about this simple plastic cylinder with the appearance of a huge syringe? Will the AeroPress make the traditional French pot completely extinct? And so, it is my tricky goal today to compare the two devices, to help you decide between the two, or convince you to own one of each like I do.

An AeroPress brewing kit basically is made up of two plastic cylinders. The larger cylinder is the brewing chamber, and it has an opening on both sides. On one side a filter cap, (with a fresh filter inside), is screwed on to the chamber. Freshly ground coffee is placed into the brewing chamber, and it is then fitted onto your favorite cup. Hot water is then poured onto your coffee.

The second cylinder, (the plunger), fits into the brewing chamber and is pressed down, pushing the water and adding pressure for better coffee extraction. Sounds simple right? For the most part, it is very simple, and trust me, you can’t brew a bad coffee with the AeroPress.

The brewing process is not as simple as drip brewing, for instance. But the specific technique is what makes this type of coffee special. If you want to enjoy a cup of joe above average, don’t let this stop you.

More Control over the Brewing

AeroPress is the only non-espresso brewing device that allows the user to alter all the variables that are necessary for good coffee making. These are time, temperature, pressure, water volume, ground coffee quantity, and the ratio between the two. And this is the main difference between the AeroPress and the French press, the option to control all the brewing aspects.

Pressure: this is the reason why the AeroPress is the better coffee maker.

The most notable quality of Aerobie’s brewer is that it allows the barista to change the pressure depending on how they like their coffee.

Now, this wouldn’t be anything like the 9 bar pressure that you get from an espresso machine but it would be far more than what you could create with a French pot, which is none.

Pressure facilitates a more complete extraction and allows more soluble solids and coffee oils to pass into your coffee.

Another very handy aspect of this nifty coffee maker is its shorter brewing time compared to the other traditional brewing methods. Total preparation time generally doesn’t go beyond 1 minute and 30 seconds. This is not a rule to go by, just a general practice. As I mentioned, time is one of the variables that the user is able to adjust depending on what they prefer. In fact, I came across one coffee lover on reddit.com who said his preferred brewing time was a whopping 7 minutes!

Having said that, it is generally accepted that the AeroPress brewing time is shorter than the French press. French press usually takes about 5 minutes to prepare, vs AeroPress a little more than one minute.

Apart from the fact that the difference between 1 minute and 5 minutes is huge when you are impatiently waiting for your morning caffeine fix, this shorter extraction time is the reason that a lot of coffee drinkers prefer the AeroPress to the French.

Less extraction time means it is less likely that the coffee is going to be over extracted. As a side note, I personally don’t believe in over-extraction caused by a too long extraction. If you steep longer, lower the water temperature.

Absolute Convenience – Easy to Clean, Carry, and Brew with

The last shining feature to point out about this great little contraption is just how easy it is to manage. It is designed so that the used coffee grinds are pushed through the brewing chamber by a rubber seal. These can be popped straight into the bin. Then all that is needed is a quick rinse.

This also means that you don’t get any leftover grind in your coffee cup which would often happen with the French pot. Think about this quick method of dealing with grinds compared with the big mess of coffee that you get when you’re cleaning out the French press. My mom spent loads of mornings when I was growing up unblocking the sink because of all of those leftover grinds. It’s easier than dealing with the French press spent grounds, or with espresso pucks. You don’t even need a knock box.

If you ever were a little reluctant about the AeroPress because of its plastic components, no need to. The brewer from Aerobie is also brilliant because it is completely BPA free and so is dishwasher friendly (on the top shelf of course)!

Now, I'm not going to try and pretend that this article is completely unbiased, (I think it is pretty obvious what coffee maker I prefer), but I do have to point out that the choice is not that simple. Some features of the French pot have made sure that it has kept some loyal coffee addicts even now that there is more competition in the market.

Even an Aeropress partisan like me loves a cup brewed in a press pot from time to time. In fact, I brew French press more often that I would like to admit.

What Makes a French Press Special

First off, the French press traditionally brews a more robust, stronger tasting cup of coffee. This is because course metal mesh is used to treat the coffee rather than the micro-filter that the AeroPress uses. Now, even though this means that you might find the odd coffee grain in your coffee cup, this also means that a lot of the oils and tasty properties from the coffee bean are taken into the cup.

The aromatic oils and the soluble solids are the reason for all the delicious, rich flavors in a good cup of French press coffee. This taste is difficult to compete against with the milder, more rounded flavor that you get from AeroPress coffee.

Brew More than a Cup

Another great reason that the French pot is still a great player on the market is its size. The French press continued to exist and to be successful in the retail coffee market because it can brew more than a tiny cup.

A traditional pot brews enough coffee for four decent sized coffee cups. Some pots are even bigger. Imagine a big family, (like my own), having breakfast and making all the coffee from an Aeropress that only brews single servings. The eggs would turn to rubber, the toast would be cold, and the dog wouldn't be fed. Everybody would be cranky for the day because they didn't have a good breakfast, and probably didn’t get their coffee either!

That is unless you want to buy an AeroPress for every coffee drinking member of the family. In a family like mine, where there are six, that is not so likely. As I said, I am an Aeropress fan, and I declare it. However, in our kitchen, the French pot has its own place. Partly, because my wife loves the coffee brewed in it, and partly because we can brew for the whole family.

Here is a summary of the differences between the two brewing devices:

So there you have it, folks. Both brewing methods are great, they appeal to different tastes, and they are outside of the drip coffee range, with a clear, clean taste. They are both closer to espresso style, with more flavors, and body.

Of course, there is also the age-old question of size versus speed and comfort against precision.

What type of coffee drinker are you?