Browse various specialty and craft coffee Instagram accounts for more than 5 minutes and there’s a pretty good chance you’ll run into one of Fellow’s line of Stagg water kettles. It makes sense for Instagram — it is beautiful, reflects light softly and shows that, yes, even something as traditionally banal as a water kettle must look the part.

But the Stagg kettles aren’t boring, no, quite the opposite — they look like the product of some wormhole collaboration between Sith lords and Muji’s design team. And they’re packed with function, too. Virtually every competition brewer, café owner and specialty coffee big wig know what they are, and there was near-ubiquitous praise for it. We got our hands on the Stagg EKG kettle to test, compare and see if we could figure if a kettle could warrant the price of a solid home grinder, or a dozen bags of coffee.

The Good: The point is worth belaboring — the Stagg EKG looks dope. The matte black body with a mirror stainless steel interior is further elevated by the soft glow of the digital display. It’s quite easy to use as well; one knob and two small switches handle all functions from adjusting desire temperature, changing from Celsius to Fahrenheit, initiating temperature holding mode (up to 60 minutes) and the built-in brew timer.

From a performance angle, the kettle is quite fast at bringing water to that desired temperature (significantly faster than its competition). The lid fits snugly without being sticky or difficult to remove, and the handle, though strange, fits into the handle well. The gooseneck pour is smooth, slow and precise.

Who It’s For: A $150 electric kettle is not for the Keurig owner, the French press owner or perhaps even some pour over brewers. It’s for the intrepid home coffee maker who gets satisfaction from a product that nails looks and performance. A slightly more specific note — I’d recommend it far more for pour over brewers using smaller brewing mechanisms, namely V60s or Kalita Waves, as the pour is fairly slow, which made brewing a large batch on a Chemex tedious.

Watch Out For: The Stagg EKG is $150 when most of its competition is nearly $100 less. Though it’s packed with functionality, not much of it is truly groundbreaking. It does the same things that other electric kettles do, only better. Apart from this, the handle, though it fits in the hand nicely, could’ve used some love, material-wise — it’s a sort of chintzy plastic that feels like it should’ve been rubber (or another heat dissipating material). Another small issue with the handle arises from the tiny stainless steel ring that connects it to the kettle, which gets quite hot during brewing and is easily scraped over. 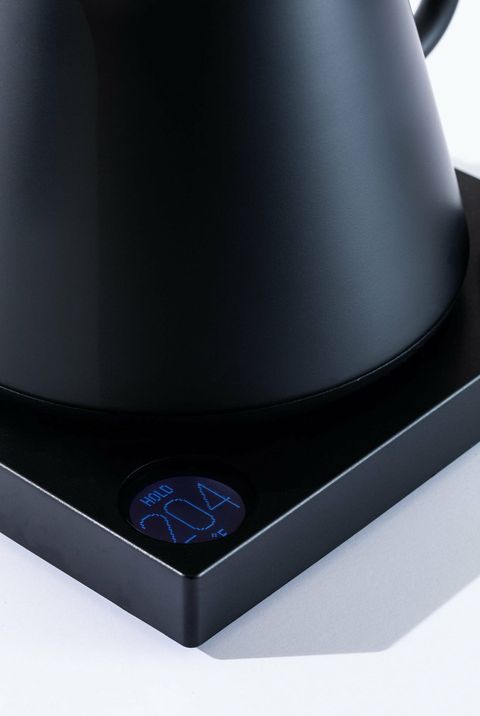 Alternatives: If you want something to compete with the Stagg’s looks, you’re out of luck. Nothing does. But, Cosori Electric Gooseneck Kettle, is a good alternative. It doesn’t have the same emphasis on form but it has a timer, gooseneck spout, digital temperature selection and so on. It’s a minute or slower to pre-heat a full kettle (less so with less water), and at 140 to 212 degrees, its temperature options aren’t as wide as the EKG’s (105 to 212 degrees). It is, however, anywhere from $50 to $100 less expensive and frequently on sale. If the big price tag of the Stagg EKG gives you cold feet, flag the Bonavita and wait for a deal — we’ve seen it as low as $50.

Review: When I unboxed this product at our office there was audible ahhh-ing. It’s sleek. But the form is only important if the thing works. In short, it does, and it passes with flying colors.

Pre-heating three different amounts of water — one-quarter liter, half a liter and .9 liters (max volume) — it reached temperature faster than the Bonavita did. A function of materials and a more juiced up power system, I imagine. The larger the amount of water, the larger the gap in pre-heating time, though that gap at its biggest was only a bit more than a minute.

The product functions almost entirely from a knob on the front, and it’s for the better. There’s not a dozen buttons and wheels and what have you on it — just plug it in, click the button and turn to whatever the needed temperature is. Once it’s set, the screen flashes briefly, it shows the current temperature and the machine begins to whir. A short time later, the water is ready. Two tiny switches are found on the backside of the base — one to change between Celcius and Fahrenheit, the other to enable temperature-holding mode, which will keep the kettle at whatever level you decide for up to an hour.

When pouring, as noted previously, there is one real drawback, one potential drawback and one mildly annoying detail to keep in mind. Burning the top side of my pointer finger happened a few times until classical conditioning took hold and I no longer wanted to touch the shiny metal bit on the grip. The gooseneck pour is quite slow, even when holding it as steep as possible. This was fine for smaller brew batches, but it may present problems with a Chemex, as saturating the full bed in a consistent manner was a bit trickier than expected (this is remedied by employing a brew method with one or two very, very long pours instead of big pulse pours, but I digress). Finally, why the handle feels so cheap is beyond me — again, I’m assuming the plastic used is ideal for quashing heat before it reaches the hand. All the same, it feels like an odd slip-up in an otherwise considered product.

The count-up timer is also turned on by the knob (please, companies everywhere, give us more knobs) and does what a timer does well. It’s not a huge plus, but proper pour-over brewing requires timing and this alleviates the need to use your microwave timer or something else.

Verdict: It is the kettle for the coffee-obsessed. If you are that, get it. If you know someone who is almost that and you wish them to become that, get it for their birthday or another gift-giving season. Its functions, though not revolutionary, all perform at a higher, broader level than its competition and are wrapped in a package you’ll be proud to put on your countertop. If you’re on the fence about pour over, or are short on cash at the moment, get Bonavita’s rock solid, slightly less attractive option.

What Others Are Saying:

• “Overall this kettle is great. It’s quick, it’s simple, it’s attractive when, in my opinion, essentially no electric kettle is. It has the most important feature for an electric kettle in my opinion: variable teperature control to the degree. It goes as low as 104° which I do occasionally have use of. It’s really well thought out and executed for the most part which is why I’m going to pick on it a little harder for where I think it falls short.” — John, Amazon Customer Review

• “The kettle holds water at your temperature of choice for up to an hour, and a built-in stopwatch counts the extraction or steep time. And there’s an Easter egg: Take the kettle off of the base, toggle its switch between Celsius and Fahrenheit, and a retro-looking game called Wormy will pop up to play as you brew.” — Lauren Levy, The Strategist

Weight: 4.5 pounds
Dimensions: Base is a 6-inch square, height is 8 inches with kettle on base
Max Volume: .9 liters
Power: 1200 Watts